From Idea To Product

On a typical sound-cart for motion-picture and TV filmmaking there are lots of devices that require something around 11–14V DC. The recorder, mixer, wireless microphone receivers and maybe a light all need this kind of power. So it is pretty handy if they all can be powered from a single big rechargeable Li-Ion battery. For this purpose I built a power distribution box that connects all these devices to one power source and that has individual switches for all of them so the ones not in use can be powered off easily.

I started out with an empty cardboard box I had lying around. To see if all the switches and the LC display fitted the space it provided I made a kind of prototype.

Now I knew how much space I needed to fit all the parts. I had never before worked with self-resetting PTC polyfuses so I experimented around a little bit.

I also thought it would be nice to have an LED light up whenever one of those fuses goes off. So I soldered a tiny circuit board to each output socket that connects the output, the fuse and the LED. The LED actually bridges the fuse. That means: when the fuse goes off (meaning it becomes non-conductive) all the voltage is dropped across the LED and its built-in resistor so it lights up.

The LCD I used was bought as-is off eBay and it came with a wiring diagram which I had to implement into my build.

So this is the schematic for the whole box. Notice the LEDs are missing in this. the go across the yellow ohm symbols.

After ordering a plastic housing of the correct size I went to work and started putting it all together as best I could.

The result came out quite nice, I think.

This year for christmas I built a nice coat rack as a present for my sister. I thought I’d just share the idea. It’s actually really simple. All you need is

I chose to use a phot that I had taken myself some time ago in the woods and get some decorative hooks that matched the woods theme. Download [download_link link=”http://mixedtinkerings.com/wp-content/uploads/2015/12/Walde-Watermarked.jpg”]my photo[/download_link] if you want to use it. 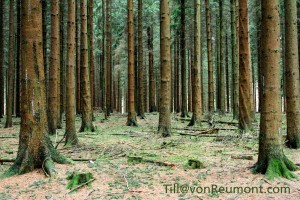 Simply wrap your wooden board in the piece of cloth or fabric or photo, add some hooks for coats and screw in some loops or lugs so the whole thing can be hung on the wall.

I have added a new project to the site: The Tillcopter I.